THE NCCA AND THEODOR SCHÜTZ ENSEMBLE

The NCCA and Theodor Schütz Ensemble

The concert is dedicated to the 150th anniversary of Komitas

ACC was established in October 2000, under the sponsorship of “Vatche and Tamar Manoukian” Benevolent Association.  The Artistic Director and General Conductor of ACC is Robert Mlkeyan.

In 2009, on the occasion of the 140th birthday anniversary of Komitas, the choir conducted successful concert-master classes in France and Switzerland.

In 2015, on the occasion of the 100th anniversary of Armenian Genocide, the choir performed in Switzerland (Central Cathedral in Zurich), Lebanon, Argentina, Greece (Athens, Thessaloniki).

One of the greatest achievements of the chamber choir is world famous ECM Records’ release in 2006 of «ARS POETICA» CD of choral concert written by Tigran Mansourian on the basis of Yeghishe Charent's 10 poems. In 2006, the CD received the highest rate of five stars by the World Music Council. The full information on the CD is placed in “The Gramophone” prestigious music catalogue.

The multi-genre repertoire of the choir includes multiple choral and vocal-symphonic works of the world-known composers, dating back to the medieval period, as well as contemporary ones.   The choir also appeared with numerous debut performances in Armenia.

Propagating the works of the Armenian composers is an important mission of the ACC.  They brilliantly perform works by Komitas, as well as modern Armenian composers.  The choir appeared with world premieres of works by Tigran Mansourian, David Halajian, Yervand Yerkanian, Edward Hayrapetian and many others.

In addition to the frequent concerts in Yerevan, ACC implements charity projects by performing in educational institutions and regions of Armenia, thus introducing the choral culture and reaching out to a wider audience of Armenia.

Maestro Mlkeyan is an Honored Artist of Armenia, “Movses Khorenatsi” medal recipient, as well as Armenia’s 2nd degree medal recipient for the services provided to his motherland.

He received his primary music education in the Music School after Mirzoyan, class of violin.  He then studied in Saint Petersburg, class of symphonic and choral conductor.  He continued his graduate studies in the class of Emin Khachatryan, as his assistant trainee.

In 1984-1986, he was conductor of students’ choir of Komitas State Conservatory’s composition and music theory depa ... 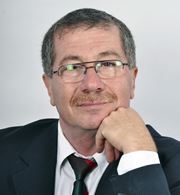